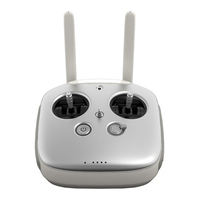 DJI Inspire 1 RAW Quadcopter with X5R 4K RAW Camera and Controller is a Ready-To-Fly aircraft with an impressive list of features and a customisable setup. It shoots 4K RAW video and 16 megapixel RAW stills, can be controlled from 5km away and uses GPS, Russian GLONASS, sonar waves, and visual sensors to fly both inside and outdoors. The Inspire will open up a world of high dynamic range aerial cinematography to inspire your imagination and ignite your creative spirit

Advanced Zenmuse X5R 4K RAW Video Technology
The Inspire 1 RAW features DJI’s Zenmuse X5R camera body which boasts UHD and DCI 4K RAW video recording capability at a range of frame rates from 23.98 in 4K up to 59.94 at 1080p. This allows you to capture high resolution footage with an incredibly wide dynamic range and explore aerial angles in your production. The camera is also capable of recording 16 megapixel still RAW and JPEG images and you can easily pull an image from the 4K video files.

Micro Four Third Lens Mount
With a standard Micro Four Thirds mounting system you have a choice of lenses with full wireless control over the focus and aperture among other settings like auto exposure lock.

Included Lens
The 15mm (35mm equivalent) lens on the X5R is comprised of a 9-element construction and it uses a wide f/1.7 aperture to ensure a bright, sharp image quality with a 72° wide field of view. It can shoot single shots as well as capturing 7 frames a second in the burst mode. The camera uses a 4/3-inch CMOS sensor with an ISO range of 100-25600 to capture stunning images and video even if the sun sets and your light levels drop.

High Video Quality
The X5R is capable of exporting a maximum video bitrate of 2.4Gbps with a huge amount of image data, with a choice of video encoders MPEG4, AVC, H.264 and JPEG-Lossless (RAW) and the 3 video formats of MP4, MOV and Cinema DNG (RAW)

Highly Gradeable Footage with a Wide Dynamic Range
Offering options for colour styles from sRGB, Colour looks, LOG, Cine-D, D-LOG (RAW) can help you to take full advantage of the cameras impressive 12.8 stops of dynamic range to capture both shadows and highlights in perfect clarity.

3-Axis Gimbal Stabilisation
With an advanced 3-Axis Gimbal that receives information from the intelligent flight controller to compensate for flight motion, you can be confident your shots will be always level and smooth. The Gimbal features a custom-made processor which provides ultra-fast compensation for motion and tilt in real-time.

Aerodynamic Retractable Propeller Arms
The Inspire 1 RAW sports 4 propeller arms which act as the quadcopter’s landing gear when resting on the ground but are able to lift out of the camera’s way to provide a full 360° view when the aircraft is flying. They are constructed from light but incredibly durable carbon fibre so they do not weigh down the drone in the air but are able to support the unit on the ground.

Advanced Positioning Systems
Using a combination of Russian GLONASS and GPS satellites the aircrafts positing system is incredibly accurate allowing the drone to hover in the same spot regardless of wind currents. The inclusion of a Vision Position System and Optical Flow technology enables flights indoors. The quadcopter uses visual information and sonar waves which is sent to a dedicated CPU chip to calculate the aircraft’s position for situations where a GPS signal isn’t available.

Brushless Motors with Curved Magnets
The quadcopter features high end 3510H brushless motors which provide increased motor velocity from the previous model this means that you have better control and increased thrust. Inside each one there are magnets that work to rotate the propellers, the new design utilises curved magnets to decrease the airflow gaps in the motor which leads to much more efficient motor performance.

Smart Power Management
The included intelligent battery allows for better power management by recording the voltage of each cell, the total lifetime charge, and the overall health of the battery. Using advanced algorithms, the inspire 1 is able to alert you based on how far away your drone to let you know when you should bring the aircraft back.

Sophisticated Internal Processors
Using an Inertial Measurement Unit (IMU) that has an in-built accelerometer and a 6-axis Gyroscope the drone is able to generate an incredible amount of environmental data. This information is sent on to the Main Controller which translates it into action, all while receiving and processing a huge amount of other sensory data and ensuring that the aircraft responds to commands instantly.

Separate Camera and Gimbal Controls
The included 2.4Ghz Radio Controller makes aerial filmmaking easier than ever by offering camera and flight dedicated control buttons and dials. Featuring a built-in dial for gimbal tilt, a return to home button, and record and playback buttons as well as HDMI outputs, a USB port and a dedicated switch for the 3 main flight modes.

Built-in rechargeable Battery
The battery life of the controller is displayed live on the front of the remote and built in alerts trigger when power is running low so you can bring the aircraft home and re-charge with the included charging cable.

Failsafe Return Home Function
The 6000mAh LiPo 2S battery will also trigger a failsafe return to home function in the event of low battery life or a lost remote connection.

The DJI Inspire 1 features several different flight modes to give you complete control over your flights so you can unleash your creative energy with an all-new aerial perspective.

Course Lock
Enables you to specify a master direction so that the forward, back, left and right joystick controls are absolute, allowing you to control the direction of its flight irrespective of the direction the Phantom is facing. This makes it possible to rotate the drone without altering the relative direction of the flight controls for a simpler, more natural flying experience.

Home Lock
Sets the backward control on the joystick to navigate the drone back to the home position regardless of where it is or what direction it is facing. This feature can be useful if the drone is far away and it is difficult to fly the correct direction home.

Point of Interest
Allows you to set a specific object or location as a point of interest, so the drone can continuously orbit around it, allowing you to focus solely on the composition of the shot and camera operation for more precise results.
Follow Me

The drone automatically tracks the connected mobile device and follows you while capturing your movement from a unique aerial perspective.

Waypoint Navigation
Set multiple GPS waypoints and the aircraft automatically flies through each of the waypoints, so you can refine camera movements and easily re-create shots for additional coverage.

The DJI Go App which is available for iOS and Android smart devices allows for extensive control over almost every parameter of the Inspire 1’s settings.

Manual Camera Settings
Camera settings like ISO, video resolution, shutter speed and exposure compensation settings can be modified from the App to provide you with infinite control over the performance of the included camera.

Single tap Auto-Takeoff and Landing with Auto-Return to Home
With a dedicated on screen button you can trigger the quadcopter to initiate a take-off procedure or land. If you like you can even direct the aircraft to return to the location that it took off from by pressing the Auto-Return Home button.

Camera Modes Control
The App also lets you switch between the photo and video mode while at the same time allowing you to touch to aim the camera or start recording. You can also download your photos or videos for easy preview and editing on your mobile device.

Flight Records and Data
It is also able to display all you flight telemetry data like the aircrafts height, distance, speed and more while keeping detailed flight records and archiving your flight achievements.

Live Map, Radar and Interactive Flight Simulator
Providing a live map with a radar makes it easier for you to know exactly where you are filming and flying and an interactive flight simulator means you can perfect your flying abilities without risking your aircraft.

Supports a Range of Lenses
Compatible with the Panasonic 15mm f/1.7, the Olympus 12mm f.2.0, as well as the DJI 15mm/1.7 as well as a range of additional lenses when combined with a balancing weight the Zenmuse X5R is well positioned to take advantage of future lens innovations.

Higher Capacity Battery
It is possible to use a different battery to increase the flight time of the aircraft with the 5700 mAh optional TB48 Battery.

Remote Focus Option
Compatible with the DJI Focus, the aircraft allows the camera’s focus to be operated for fine tuning by the DJI Focus unit.